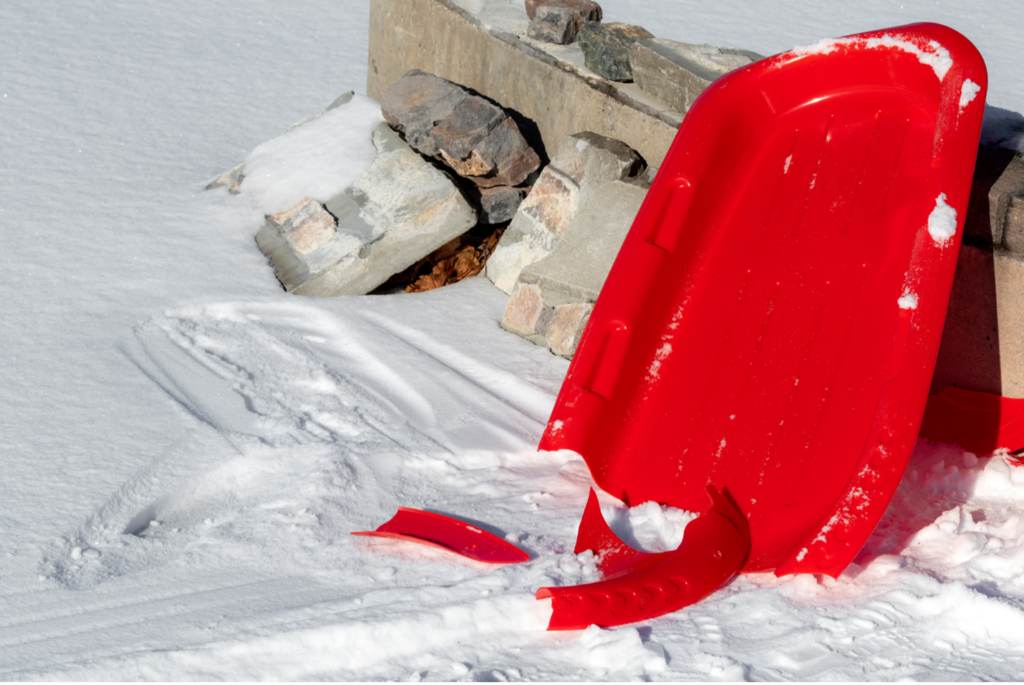 Matters of Life and Steph: “Them’s the Breaks”- Musings from a Children’s Writer

A bone to pick

I don’t think it’s a stretch to say that we’ve all made at least one poor choice (though probably many more) in our childhoods that we’d later regret. I need not share all my bad adolescent decisions, otherwise this blog would be interminably long. Instead, I’ll focus on just one: attempting to snowboard with a sled when I was twelve.

“Tough enough” syndrome has, on several occasions, served me well. Childbirth is a perfect example. On the two most important occasions in my life when I needed to be tough enough, I was.

Which brings me to a life lesson I learned the hard way: your mind can’t always beat your body.

My sled-surfing injury is the perfect example of this lesson. 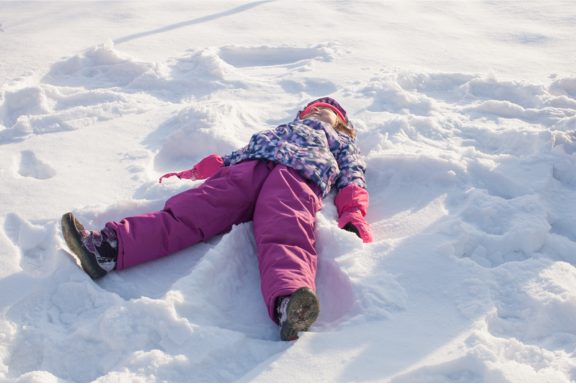 It was a beautiful winter’s afternoon the day I fractured my arm. I was at my friend “M’s” house playing in the snow. We had made up our own version of snowboarding using one of those flimsy plastic red sleds. M and I each took turns trying to stand up on the sled while going down the small hill on M’s front lawn.

After several unsuccessful attempts, M was the first to make it halfway down the hill. I was determined to go further than M. On my next turn, I had stood up for maybe four seconds before the sled slipped out from under me.

I landed on my left arm with a solid “thud.” My arm began throbbing in pain. I recall laying in the snow for a few minutes before I finally got up.

“Sled-surfing is boring,” I told M, trying to act naturally. “Let’s do something else.” I didn’t tell M that I was in a lot of pain. After all, I had “tough enough” syndrome.

I spent the remaining half hour until my mother arrived in silent anguish. I was so relieved when my mom’s grey Oldsmobile Cutlas Supreme finally pulled into M’s driveway. 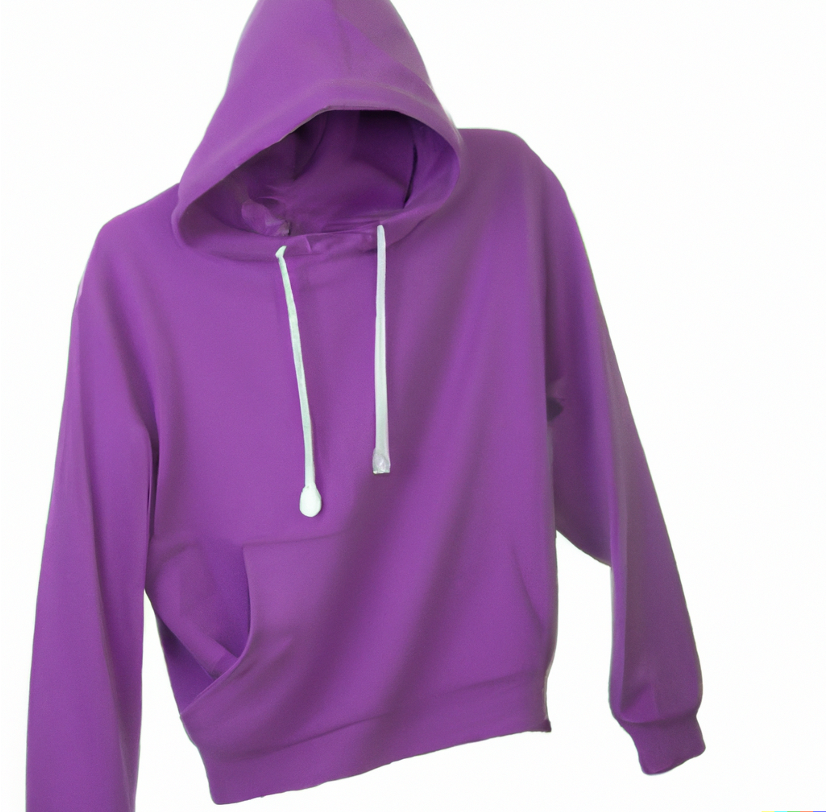 As we drove home, my mom asked how my time with M was. I said, “not bad” and looked out the window so she wouldn’t see that I was near tears. I neglected to mention that I’d fallen on my arm and that it now hurt whenever I moved it.

Truth be told, I was embarrassed to admit that I had gotten hurt falling off a sled. Maybe I just had a bad bruise, and this was no big deal. I was sure that my arm would be feel better the next day.

“Tough enough” syndrome gave me the false belief that I could quietly manage the discomfort for as long as it took.

That night, I remember we went out for dinner to a Chinese restaurant. I was in so much pain, I put my head on the table after we ordered.

When the waiter brought out our food, he said to me, “Wake up, it’s time to eat now.” Everyone had a good laugh, thinking I was tired from my play date. No one knew that my arm was throbbing. If I were a cartoon character, you could imagine my arm being five times its natural size and pulsing red.

I spent the night in agony. There was no position that was comfortable.

Still, I said nothing. The next day, I struggled to get dressed. It took every ounce of strength to put my clothes on. 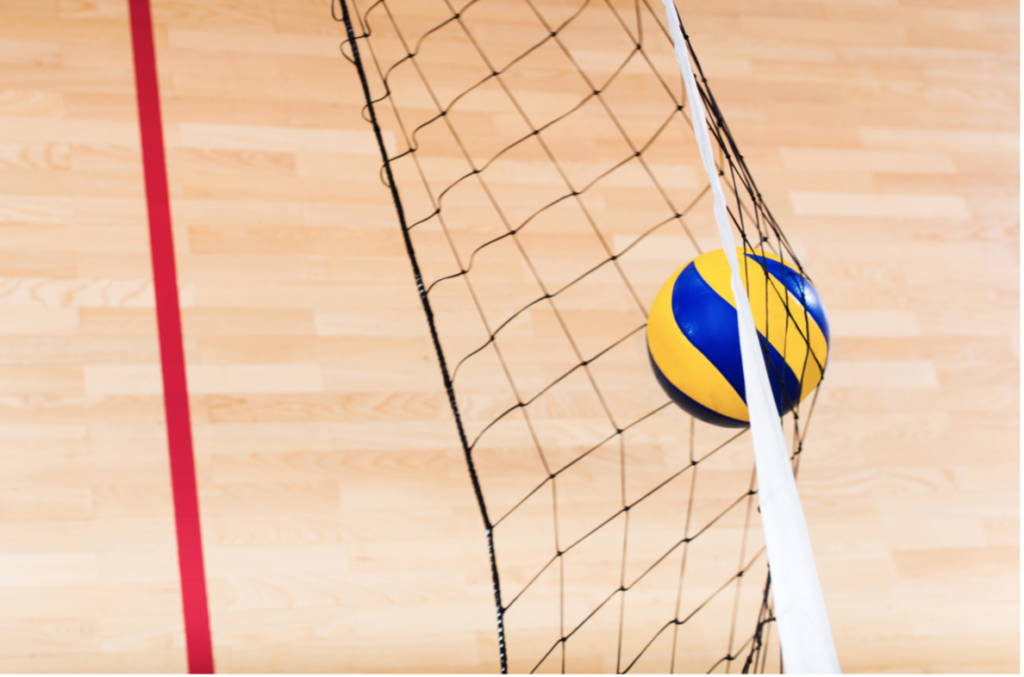 Unfortunately, the pain in my arm hadn’t gotten any better the next day. In fact, it was probably made worse thanks to gym class. Why-oh-why did we have to be playing volleyball that week? Since I didn’t want to admit that my arm was hurt, I decided that I could still play.

So how did I do it? The first time the ball came to me, I tried using both arms to hit the ball over the net. Big mistake. I nearly fainted. I think I actually saw stars. After that, I just used my right arm and tried to fake my way through the game. Thankfully, just about everyone was terrible at volleyball, so no one noticed me.

After a while, my arm began hurting even more. I asked the gym teacher if I could sit out for a bit.

My gym teacher knew that I loved sports and always participated in class, so he didn’t as any questions. Strangely, he never asked if I wanted to go to the nurse’s office. (In his defense, no one went to the nurse except in the direst of circumstances. Our school nurse was probably the most intimidating and least sympathetic medical professional that I have ever met.) 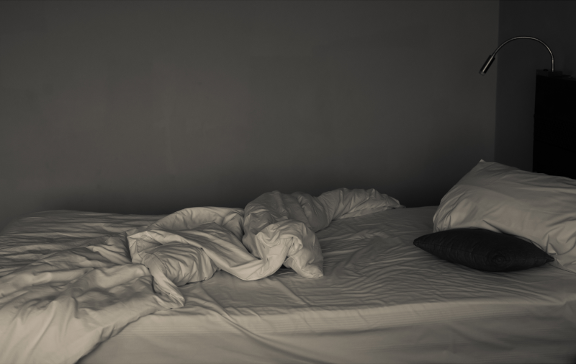 Crying myself to sleep

That night, my sister heard me crying in my room. She asked if I was OK. Through sniffles, I said that I was fine. Thank goodness my sister was skeptical. She told my parents the next morning that my crying kept her up all night.

My mom questioned me as to what was wrong. At first, I didn’t want to reveal the extent of my injury. I tried to downplay the pain I felt in my arm. My “tough enough” syndrome told I could still handle things.

“I banged my arm at M’s house,” I said as casually I could. “It’s probably nothing.” My mother gave me some pain reliever but kept a close eye on me for the next few days.

When she saw me wearing hooded sweatshirts day after day, my mom realized that my arm wasn’t getting better. After I got home from school on Friday, my arm still in a makeshift sling, my mother decided enough was enough.

“I’m calling a doctor,” she said, as she dialed the number of an orthopedist. 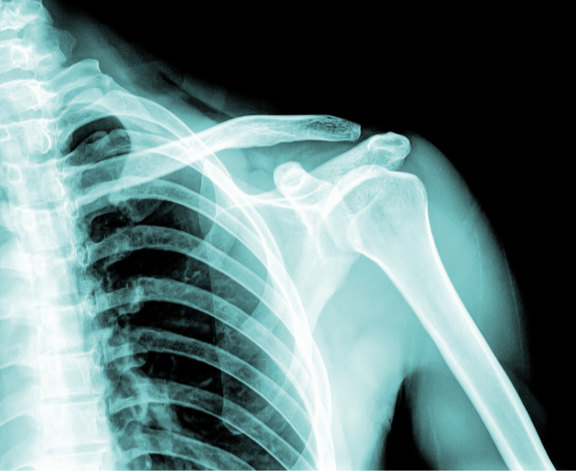 Got the world on a “sling”

By the time I went to the orthopedist, nearly a week had passed since the sled-boarding incident.

From this experience, I learned an interesting fact about fractures and x-rays: normally, hairline and stress fractures don’t appear in an x-ray until the bone has started to heal. But because we’d waited a week before seeking medical attention, my x-ray revealed that there was indeed a hairline fracture in my arm.

Sadly, due to the delay, the doctor said there was no point in my getting a sling at that point. Ironically, I was most disappointed by this piece of news.

So, I was stuck wearing that stupid purple hooded sweatshirt until my arm felt better. 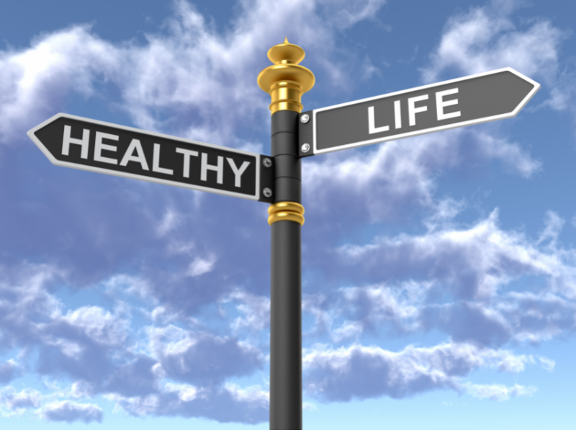 While it would be nice to say that I learned a valuable lesson about listening to my body after my sled-surfing mishap, I’ll admit that I still have an imperfect track record. I give myself a small amount of credit for being vigilant about annual checks ups, screenings, and follow-up appointments. For things that I can’t anticipate, however, there’s room for improvement.

Realistically, I don’t think I’ll ever get over my “tough enough” syndrome. I’m an avid runner and I hate missing workouts. My first instinct when something hurts is “give it a few days.” It’s hard slowing down when there’s so much to do.

But as I grow older, I find that my body is becoming more impatient when I try to ignore it. As a result, I’ve gotten to know some amazing doctors and physical therapists over the years.

And thanks to my sled-surfing mishap, I now have a constant reminder of my foolishness. As a souvenir of the experience, my left arm can predict a change in barometric pressure with an uncomfortable, dull arthritic-type twinge. I am almost as accurate as a meteorologist in predicting rain or snow. (Though I’d prefer this information didn’t come in the middle of the night.)

I wonder whether my current aches could’ve been avoided—or at least minimized—if I had just listened more to my body. I’m sure the answer is yes. (Though in my defense, it can be hard to tell the difference between pain and mere discomfort.)

Perhaps someday I’ll need to revise my “tough enough” mentality. Until then, I rely on an anonymous saying that helps me remind myself to just be more careful: “Know safety, no injury. No safety, know injury.”

Do you have a childhood memory of an avoidable mishap? Please share your stories with me in the comments section.

Steph Katzovi aims to uncover the humor and humanity found in life experiences. A former speechwriter and executive communications consultant, Steph loves creating connections through her words and stories. Voted “Best Sense of Humor” and “Class Clown” in both 8th and 12th grades, Steph has always aspired to make people smile. Readers of Steph’s work should expect to lose themselves in engaging narratives, while finding similarities to their own lives in relatable characters and themes. Hurricamp! is Steph’s first book.
PrevPreviousLessons to Live By: It’s Not “Sew” Bad
NextLessons to Live By: Spoiler AlertNext