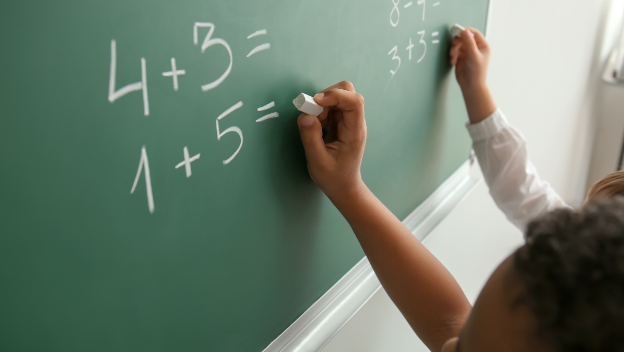 Matters of Life and Steph: “The Scarlet Number”- Musings from a Children’s Writer

Math. Mistakes Allow Thinking to Happen. That phrase may very well be true but try telling that to seven-year-old me. I was in second grade, in Mrs. M.’s class at Sheafe Road Elementary School. That school, and my time in elementary math classes, would teach me one of life’s greatest lessons: accepting my shortcomings.

I was a good student in just about everything. Except math. I knew that math was an important subject and desperately tried paying attention in class. But I just never found numbers to be that interesting. (Apologies to all the mathematicians out there.) While I could do the basic things, I never really got beyond being “just ok” at math. As a result, I still counted on my fingers in second grade.

I was sneaky about using my fingers. (Or should I say “digits?”) Sometimes, I’d put my hands in my lap to count. Other times, I’d leave my hands on my desk to imperceptibly count, casually pressing my fingers down ever so slightly—certain my micro-movements were invisible to the naked eye.

The Numbers Line of Shame

One day, as we worked away quietly at our desks, Mrs. M. breezed around the classroom with something in her hand. It looked like measuring tape that she was sticking on only a few of the student’s desks. At first, I thought it was reward. Like “X marks the spot for a top student!” I hoped I would get one.

Then, lo and behold, I did. I looked up at Mrs. M. expectantly when she came to my seat and hovered over my desk. She smiled the briefest of smiles at me. I watched her carefully unfurl this sticker strip along the top of my desk. In an instant, before I could see what she’d done, she was gone.

With a swirl of her sensible calf-length skirt, she glided off to the front of the room. The flowery smell of her perfume lingered over me as I looked down at what was now firmly adhered to my desk.

It was a numbers line. 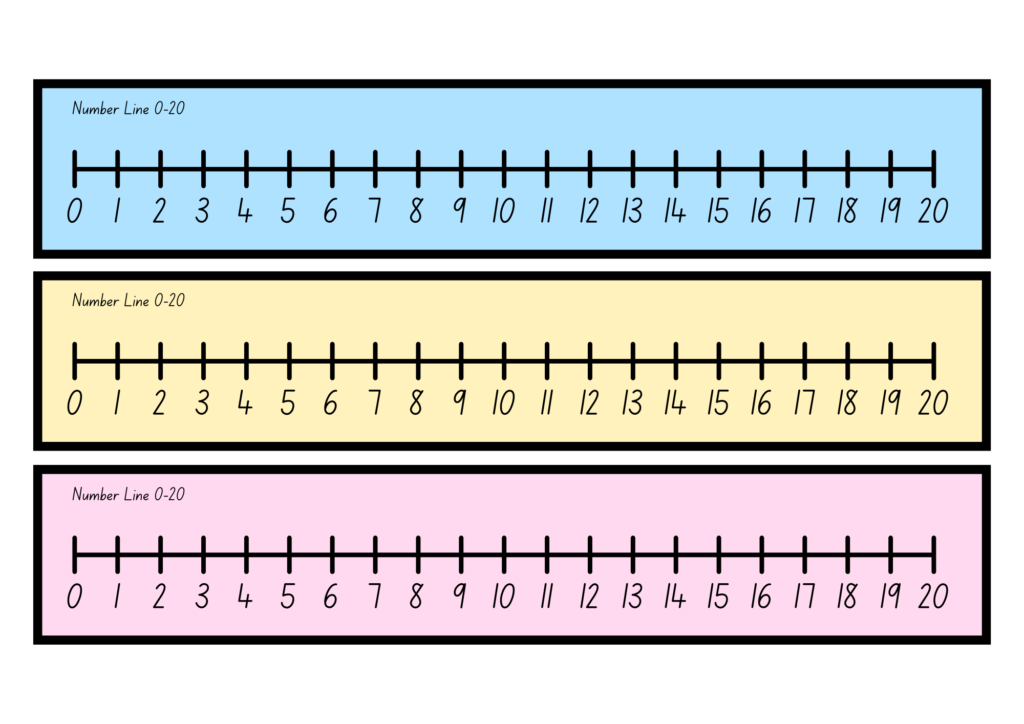 For anyone who’s never had one, a numbers line is exactly as the name implies: a strip—in my case, a sticker which was the exact length of our desks—with the numbers listed out to help students visualize which numbers are lesser and greater.

I couldn’t believe that I was the recipient of a numbers line. Me, the child whose report cards were always full of E’s (for excellent) or O’s (for outstanding)! Never in all my seven years had I been told there was an area that “needs improvement.” Well, except for my handwriting, but that was an area I didn’t consider academic in nature. One of life’s greatest lessons was sinking in. I wasn’t good at everything.

At first, I was shocked and angry. Then, my feelings turned bitter. I now loathed Mrs. M. Her once pleasant smiles now looked like evil sneers. I despised her good-natured cackle that I used to find charming. Everything about Mrs. M. made me angry. And because of my resentment for Mrs. M., I now hated math.

I’m certain that the numbers line wasn’t meant to be a Scarlet Letter (or Number?) for me—or my desk. Mrs. M. was probably just trying to help me learn more efficiently. But in my mind, the numbers line was an announcement to everyone one in my class that I wasn’t good at something.

Mrs. M2 and The Multiplication Mishap

The worst part of my saga is that my math aversion actually got worse after second grade.

In fourth grade, I had another math teacher—also with an “M” for a last name, so I’ll call her Mrs. M2.

She was a classic teacher of terror: strict, absolutely no sense of humor, and short-tempered. She even had jet black hair which made her look like a witch. Everyone was afraid of Mrs. M2, particularly because she yelled when she got frustrated. And Mrs. M2 always seemed to be at her wit’s end with our class. 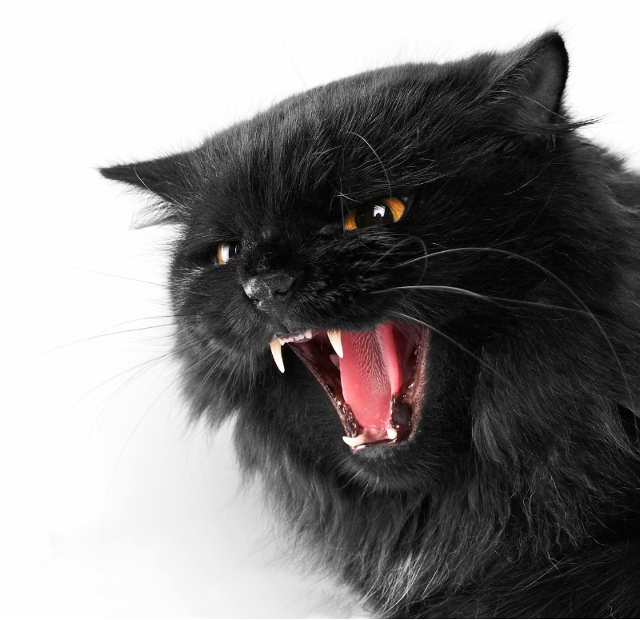 Fourth grade was the year of multiplication. The only way I knew how to learn was by rote memorization of the “times tables.” Memorizing math facts was of no interest to me, but I knew I had to do it—mostly because I feared Mrs. M2’s wrath. My mom—who happened to be a reading teacher in the same school—and I even made index cards of different equations.

To help me review, my mother would hide the cards in various places in the house. When I found one, I had to answer the math problem. It was slow going (partially because my mom was so good at hiding the index cards, but also because my brain just refused to retain numbers).

Math. The Only Subject That Counts(?)

One day, Mrs. M2 called on me. I froze when she called my name. Then, to my great misfortune, I answered the question incorrectly. Mrs. M2 shot over to my seat and asked me the question again.

Once again (and now paralyzed with fear), I answered wrong.

“You know this,” she said, hitting my shoulder in frustration.

She didn’t hit me particularly hard. I’d say it was more of a firm “press.” Either way, I was momentarily stunned. Mrs. M2 quickly called on another student, who she probably knew would answer the question correctly.

When I got home, I told my mother what had happened. I wasn’t normally a complainer and was completely honest that there was absolutely no injury other than being embarrassed about my wrong answer. My mother, however, was furious.

“Mrs. M2 went too far. You never touch a student. Ever,” my mother fumed. “I’m going to speak with her tomorrow.” As upset as my mom was with Mrs. M2, I knew she’d handled the situation diplomatically. (In fact, Mrs. M2 apologized to me the next day.) Even though we all moved on, there was nothing that could undo my mental trauma.

And so that was the end of my relationship with math. It was also a harsh realization for me about one of life’s greatest lessons: I wasn’t going to do well at everything that came my way. 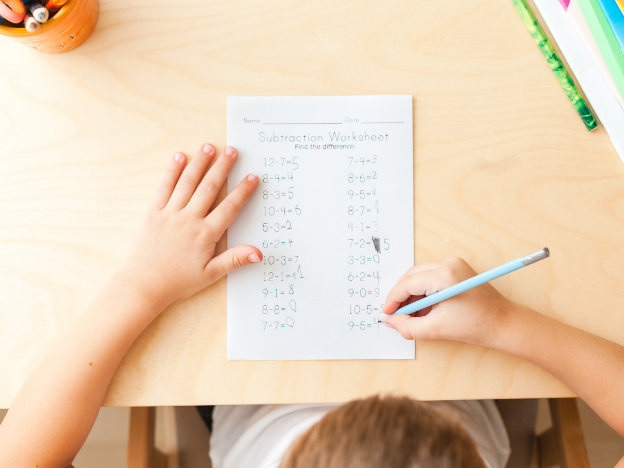 The Math Road Not Taken

Today, I am amazed at how my kids are being taught. Maybe their school is better than 1980s Sheafe Road Elementary, but it seems like everything is taught much more intelligently. Number lines, however, still exist. They appeared weekly in our house when my kids were younger. (Now, everyone in the class gets a portable numbers line regardless of whether you need it.)

I’m jealous that my kids were taught find “friendly numbers” (fives or tens) for figuring out a math problem. And they can count forwards and backwards in their heads. In their heads!! No need for my not-so-sneaky finger counting method. If Mrs. M2 is still alive, I’d slap her on the shoulder and say “See?! Maybe your teaching was the real problem.”

I wonder if I would’ve had a completely different academic experience had I been born thirty years later. Would I still have run away from all things STEM? (Today, the only STEMs I don’t run away from are vegetables.) What would or could I have become?

Learning One of Life’s Greatest Lessons: To Offset My Shortcomings

Sure, I can blame Mrs. M and Mrs. M2 for not creating a more positive learning environment. Or, maybe if I felt more comfortable making mistakes, I would have applied myself more in math.

But then again, I simply don’t have the same natural ability for numbers that I do for words. I was born to write, not add.

Ultimately, I think the academic lesson I learned from my math failure was to offset my shortcomings. While I didn’t have the aptitude for math, I could do well in other areas. 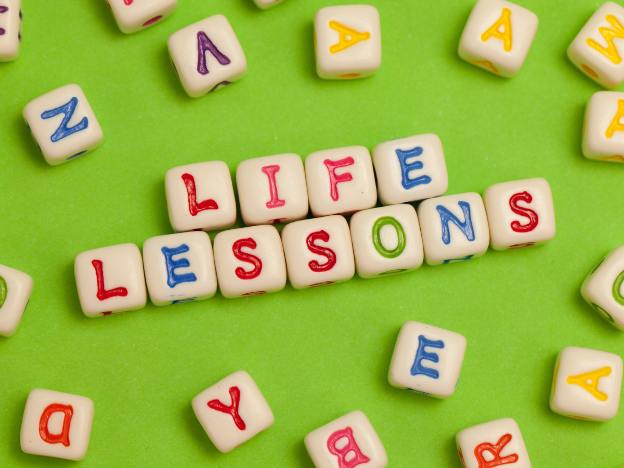 Offsetting my shortcomings by playing to my strengths has proven to be an invaluable skill.

Today, if you want someone to quickly figure out the tip for a restaurant bill, don’t ask me—unless I have my tipping app open. But if you want to go on a trip, I am your best travel companion. I will plan itineraries down to the smallest details and account for every potential weather variation when it’s time to pack (errr, overpack).

So, thanks Mrs. M and Mrs. M2 for teaching me to be honest with myself. And yes, I’ll always remember to pack snacks and extra water for you.

Could you relate to my story? Subscribe to my blog and be the first to hear more of the tales that shaped my take on life.

Steph Katzovi aims to uncover the humor and humanity found in life experiences. A former speechwriter and executive communications consultant, Steph loves creating connections through her words and stories. Voted “Best Sense of Humor” and “Class Clown” in both 8th and 12th grades, Steph has always aspired to make people smile. Readers of Steph’s work should expect to lose themselves in engaging narratives, while finding similarities to their own lives in relatable characters and themes. Hurricamp! is Steph’s first book.
PrevPreviousLessons to Live By: Taking Care of Things We Love
NextLessons to Live By: Navigating Through Recess DramaNext